Today my Holistic Reflexology students will learn how to induce labor.
The goal is to speed up the birthing process and to ensure weaker and more pleasant contractions.
Holistic Reflexology is also a powerful modality to deal with infertility and endometriosis.

In my more than twenty years of practice I also have been able to assist pregnant women with the turning of babies in a breech position. There are specific reflex points on the feet that correspond to the female organs. The correspondence between the feet and the organs is achieved through the stimulation of the nervous system and the meridians, which form the basis of Chinese Medicine. 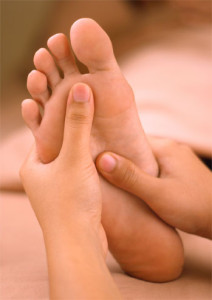 Please share these words of caution with all your pregnant friends,

as mentioned in the excerpt of my article ‘Reflexology – a Non-Invasive Healing Art’
…In Pennsylvania, I offered Reflexology for a brief period at a spa in downtown Pittsburgh. One day I watched as a pedicurist excessively massaged the foot reflexes of the female organs of a pregnant woman. These important reflex points located underneath the medial and lateral malleolus assist in the induction of labor. When I urged the pedicurist not to stimulate these areas on pregnant women, she looked baffled. “Really?” she asked. “Just a couple of weeks ago I gave a pedicure to pregnant client, and when I saw her sister two days later, she said my client had just given birth four weeks prematurely.”

Reflexology is considered safe, however, certain precautions may be considered, as demonstrated in the example above. An individual treatment plan is tailored according to the needs of the patient. The true art of Reflexology is the preventative measure. We do not have to get ill, in order to begin thinking about our health. In ancient China, the physicians’ task was to care for the health of the population. If someone got ill, then the doctor had failed. This approach is opposite to our Western perspective.
However, the soaring costs of our health care system may make it necessary to introduce non-allopathic measures, in order to benefit the health of the population. Scientific studies conducted in Europe, Israel and China have proven the validity and the success of Reflexology as an integrative part of the health care system.
All forms of complimentary medicine, including Reflexology, have become more popular in recent times. Many people realize that there are limitations and shortfalls of today’s high-tech medicine, which sometimes treats the human body as if it were a machine. My hope for the future is that we are entering an era where conventional and holistic medicine begin to work together hand in hand for the benefit of all.

The Excitement of Practicing Reflexology and its Results by Dorit Brauer, published in The South African Reflexology Society Journal, 2011.

Read Mary’s testimonial and see how Holistic Reflexology can benefit you.

Becoming A Seeker – Dorit explains the root for her sense of urgency of living and why we shouldn’t take anything for granted.

Inspirational News to Live a Happy, Healthy, and Fulfilled Life